I am Future Promise, we have just put online the demo for our project aiming to create the World’s Largest Artwork.

Due to advancements in AI, achieving massive scale in artworks is now possible. This idea has never done before & would have great potential of reaching the mainstream.

Here’s how it works:

Idea of the pot is that it is incentivising the mission while building anticipation of its end.

Every user will own a piece of the World’s Largest Artwork & one lucky one will win the pot.

How does BitDAO fit in?

We’ve got technology, you’ve got capital. We’re proposing BitDAO seeds ETH to our starting pot value, in exchange for a cut of revenue & branding partnership.

We would simply just put all of the invested ETH into our starting pot to get it started with strong momentum.

We’re happy to scale the size of the investment based on BitDAO community interest. In each case BitDAO would initially receive 100% of revenue until its funding is made back: 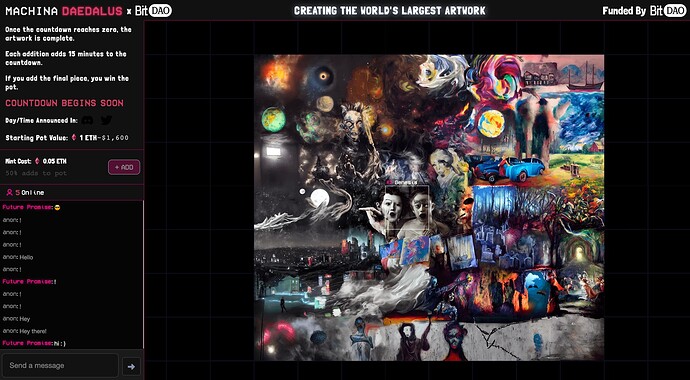 What are the projected outcomes and how will this benefit BitDAO?

This is an ambitious viral dice roll with 3 different outcomes:

The size of the prize pot increases with every minted addition to the artwork. It will reach very large numbers in a success scenario.

How long will it take to complete your proposed changes & what are the milestones?

There is no vague timeline, mysterious budget breakdown, or other complications. It is built & ready. 100% of the proposed funding would go into the prize pot smart contract. We can move fast, aside from some final prep, we’re ready to go any day with the support of BitDAO.

A team of 2 Engineers & a designer has built the project. If it were the case that the project was not built & we were requesting funding to build it, I would spend more time here making the case for our capability. But it’s right here: https://mdnft.co. You can judge for yourself!

Next Steps? If this proposal is accepted, what are the immediate action items?

If the proposal is accepted, we will finalise the BitDAO branding on our app with input of the community. Then we will deploy the finalised countdown contract for the BitDAO investment ETH to be deposited into, complete final preparations & start the countdown within days.

Happy to answer any questions!

Would you like to see this proposal go to vote?