The template below is provided to help you get started. Irrelevant or low-effort proposals will be removed.

This is a proposal to unleash a socio-political transformation based on a nationwide grassroots literacy-movement, initiated by the three moves of the thriving Pustaka Bergerak Indonesia or The Indonesian Mobile Library Network. One of moves focuses on the digital development using Web3 technology.

The Mobile Library Network is a civil society movement that works together to build the strength and independence of local communities. Its main program is disseminating knowledge and good books, especially in areas where the means of communication are underdeveloped. Communities that are geographically isolated, and socially marginalised, receive special attention. The Mobile Library was established in Indonesia, 2014, with one library-pony and two library-boats. Now the network is growing to about 3000 mobile library nodes spread throughout Indonesia, and keep on growing while trying to outreach friends anywhere on the planet.

The local partners as well as library managers come from various walk of life: horse groomers, tire repairmen, fishermen, former journalists, traveling traders, artists who have returned to their villages, students who have dropped out of school who are determined to continue their formal education, housewives, members of the army and police, etc.

The first principle of the Mobile Library Network is real grassroots libraries must be mobile to visit their readers, especially children, and not wait to be visited. Library is first a verb, only later it becomes a noun.

The second principle is a good book is a vehicle for storing information, knowledge and wisdom; yet any book that move from one hand to another may get a new dignity as a gift, as a token of friendship and solidarity with others. Books that are sent from one place to another in remote areas, become the thread that knit our national bonds, confirming the spirit of our brotherhood.

The fourth principle is if art and culture are the most important instruments to build togetherness and strengthen self-worth and dignity, then technology is the most powerful instrument to search and distribute the future.

The genuine respect for the condition of the local community with their diverse culture and arts has given rise to various mobile library nodes, such as library-horses, library-boats, library-motorbikes, library-carts, library-tricycles, library-bicycles, and many others.

To expand the reach of the free books distribution while at the same time increasing public participation in donating books and building libraries in their respective places, The Indonesian Mobile Library Network has proposed for the FCL (Free Cargo Literacy) program. This proposal was then approved by the President Joko Widodo on 2 May 2017. PT Pos Indonesia (Indonesia state-owned postal and cargo corporation) was given the task of assisting. This movement began on May 20 2017, starting a wave of free book deliveries every 17th to all corners of Indonesia.

The FCL movement not only increases children’s passion for reading and accelerates the transfer of knowledge from the center to the periphery. This movement also ignites citizen participation and makes them important subjects to participate in the intellectual life of the nation. The FCL has indeed helped to strengthen the brotherhood and solidarity of people who may never meet each other but join forces and help each other to improve the quality of Indonesia’s human resources.

Due to the enthusiastic participation of citizens, the costs incurred by the FCL were greater than the CSR (corpemphasized textorate social responsibility) budget of PT Pos Indonesia. For the time being, the FCL Program that means so much for the underprivileged children and volunteers is suspended. For 20 months of free book delivery from May 2017 to December 2019, the costs borne by PT Pos are around 14 billion IDR. About 313 tons of books flew across the skies over the Equator, spreading good reads to strengthen solidarity. In those two years, volunteers and philanthropists throughout Indonesia could have fun and take part in helping the country’s capacity to dream and act together.

So far, the Mobile Library volunteers have worked voluntarily. They fund their own activities, and help each other to keep the network alive. After several years of moving, especially since the suspension of the FCL followed by the outbreak of Covid-19, it is increasingly pressing to transform the network and build a system that give the network a full independence and capacity to fund the network’s activities nationally including the much needed Free Cargo Literacy program. This transformation will be carried out by developing a DAO (Decentralized Autonomous Organization) called DAO BERGERAK or MOBILE DAO.

How will your proposal, if activated, benefit BitDAO?

What are the projected outcomes?

How long will it take to complete your proposed changes?
3 to 6 months

Who is involved?
The MOBILE DAO development will be handled by a team led by Nirwan Arsuka and Enrico Halim.
The movement involves the volunteers of The Indonesian Mobile Library Network consisting of 3000 hubs and 10000 personnel, supported by all teachers and all worker of the nation postal system, and a part or the police and army department.

What are the milestones?

Next Steps? If this proposal is accepted, what are the immediate action items?

The BIT Community and delegates might discuss and verify the following before considering proposals.

DAO BERGERAK or MOBILE DAO is a part of the Mobile Library Network utilizing blockchain technology to support a nation-wide grassroots literacy movement in a progressive, agnostic (regardless of ethnicity, religion, race, economic class), and sustainable ecosystem. We are already setting up a simple DAO system that hopefully can automate an incentive mechanism, voting process, and tokenomics, through a smart contract. The Mobile DAO members are the owners, as the workers, as well managers, of the movement. The short-term goal of the Mobile DAO is to facilitate about 3000 library nodes and their more than 30000 members.

In three to four years, the Mobile DAO with its gamification and metaverse should be able to facilitate various movements related to literacy development in contemporary art and socio-political area, including the government sector, in Indonesia and beyond. The activity of this borderless community will significantly influence and give rise to the value of the token it is adopted (made).

The opportunity to participate in real at the global level appeared at the end of 2021. The Mobile Library was invited to participate in the 17th Istanbul Biennale, which will be held on 17 September - 20 November 2022. Apart from reporting various activities and achievements of nearly 3000 nodes of Mobile Library in the form of audio-visuals and replicas of library vehicles that rely on local wisdom and culture, the Mobile Library will also exhibit the experimentation of the Mobile DAO expected to take part in the synergies between grassroots literacy movement, international art activities, and the use of web3 technology to support various emancipation movements. 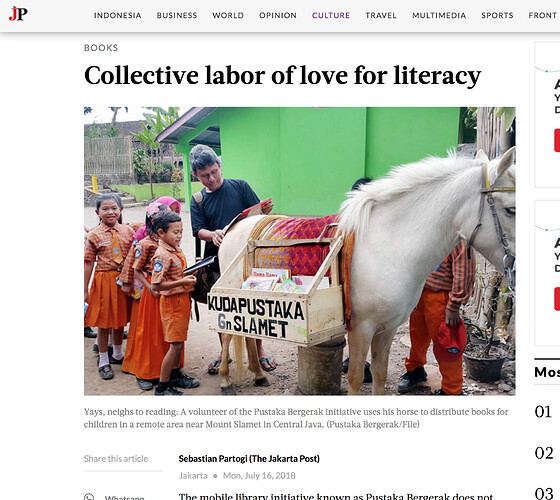 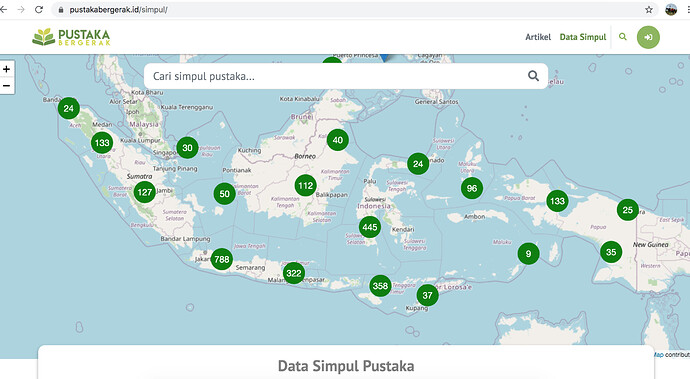